‘He’s the one!’ – Wright praying Arsenal manage to seal £50m deal for Odegaard

Ian Wright has urged Arsenal to wrap up a £50 million ($68m) deal with Real Madrid for Martin Odegaard, with the Gunners great billing the on-loan midfielder as “the one”.

A talented Norway international moved to Emirates Stadium on a short-term agreement during the winter transfer window.

He has impressed in north London, with another eye-catching performance put in during a thrilling 3-3 derby draw with West Ham, and Mikel Arteta has been advised to do whatever it takes to keep the 22-year-old on his books. 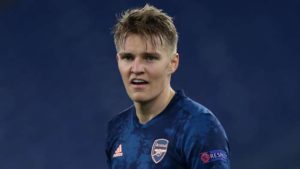 What has been said?

A legendary former Gunners striker has told the Wrighty’s House Podcast: “Watching Odegaard play for Arsenal, I’m so happy and I’m so sad.

“Simply because when you look at Odegaard’s contribution, and I was thinking this with the West Ham game, it’s going to be different, he’s got [Thomas] Soucek and [Declan] Rice. He’s going to be playing in that area where he has got some real ballers with him, and I said before the game, I want to see how he does, and not only does he excel, we go 3-0 down, and the man is literally just showing up.

“On the half-turn, his quick thinking, his passes, as soon as he gets it, he already knows what he’s doing.

“We have to find a way to sign him. I don’t know how it’s going to happen. He’s the one.

“For him to come to the Premier League, we’re talking about a guy who looks very slight but he doesn’t get himself in that traffic and trouble.

“You’re thinking that’s the quality and composure Arsenal need. Arteta must be on the sideline thinking, ‘oh my god, this is what I need, this is the guy’.

“His contract runs out in 2023 with Madrid, we’re going through a spell where there’s not a lot of money about, Madrid need money, if [Zinedine] Zidane stays there can you see him putting Odegaard in his team?

“You’re thinking to yourself if he carries on playing like he is, because we’re looking at [Luka] Modric and [Toni] Kroos and they’re going to have to get replaced by someone at some stage now.

“Whether that’s Odegaard or they might sell Odegaard to finance getting somebody else. When you look at him, this is serious business with Odegaard, this is a player we need, and I don’t know how they’re going to do that.

“For me, I think £45m to £50m, even though we’re talking about someone who’s been on loan to Holland, Spain and now here, he’s played a handful of games but he looks so impressive.

“You have to pray, the Arsenal fan base have to put it out into the ether, the energy and the good vibes, to make it happen because he is needed.”

Odegaard has registered two goals for Arsenal through 12 appearances in all competitions.

He claims to have given little thought to staying on at the Emirates, with his focus locked on the present, but a permanent move has not been ruled out.

It remains to be seen whether funds will be made available to discuss a deal, or whether Real will open themselves up to selling, but Arteta has found a regular role for the Norwegian within his plans and will expect further progress to be made as he receives more Premier League experience.

Woman who left husband to marry their pastor speaks (video)