Former Barcelona technical secretary Eric Abidal has revealed that the club would have brought Neymar back to the club if they had not signed Antoine Griezmann in the summer of 2019.

The Frenchman, who won two Champions Leagues with Barcelona as a player, gave an insight into his thinking when he was travelling to France to see about re-signing Neymar from Paris Saint-Germain. 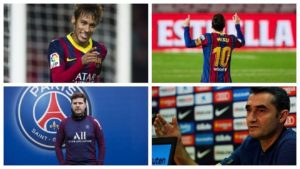 “Ten days before the end of the transfer window, I went to Paris to talk with Leonardo [PSG’s sporting director] and I was with my CEO [Oscar Grau], and we were talking about Neymar,” Abidal told the Telegraph in what is his first interview since leaving Barcelona last summer.

“I think if the CEO goes to Paris Saint-Germain, it’s because we can sign him. If we didn’t sign Griezmann before, I think 100 percent we could have re-signed Neymar, because what we needed was a winger and when Neymar was in Barcelona he was amazing.

“This is not about which player is better, it was what I thought was the position we needed at the time. The team needed a real winger. The president [Josep Maria Bartomeu] decided to sign Griezmann.

“One of the arguments against Neymar was that he had a court case against the club, so it’s not easy. They said he would have to stop the court process if he wanted to come back. That wasn’t my problem because I was not at the club when that dispute happened. In my view, I could sign the player, but it didn’t happen.”

One big decision that Abidal wanted to make was to part ways with Ernesto Valverde, ten months after Barcelona‘s elimination to Roma in the Champions League in 2018. But, he wasn’t listened to at the time.

“In December 2018, after a full analysis of the coach, his staff and the team, I recommended that we should change Ernesto Valverde,” said Abidal.

“I said to the president ‘I think this is the decision you have to take now’. And he told me ‘no, it’s not easy’.

“Instead, he took the decision to renew the contract of the coach two months later – the opposite of what I had suggested. Of course, I accepted the decision and continued to give the coach my full support, but it was a little bit strange for me after I said to the president that it was better to change him.”

So, when the club did eventually part ways with Valverde, who did the Frenchman want to bring in?

“Quique was appointed, but my first option was Pochettino.”

Yet, despite Pochettino‘s clear history with Espanyol, Abidal did not think that would be a problem.

“I told the board, ‘I have to bring the best coach we can in the market. I’m not here for politics because he was before in Espanyol‘. For me, it’s not politics,” explained the former Barcelona technical secretary.

“I wanted the best and Pochettino is one of the best in our game. He reached the Champions League final with Tottenham, you have to respect this, he has a good philosophy of playing, a good philosophy of training, players love him and I think he would be a better coach now for this situation, but with a real project.”

One month after the dismissal of Valverde and the appointment of Setien, Abidal was publicly criticised by Lionel Messi after stating that the Barcelona squad needed to be working harder.

“I think I was correct,” said Abidal when asked about those comments.

They needed to train harder in my opinion. In my time with [Pep] Guardiola, it was ‘you want the best? Okay, you have to train like the best. You will win everything, only if you do the job during the week’. This is what I said. I never said the players wanted to get rid of the coach.

“Messi spoke to me personally as well. We had a strong conversation, but I can accept it. No problem because you have to be transparent. I was very comfortable because he was the only player who talked to me like this, the only one. I respect that.

“I also understand Messi is the captain and he wanted to defend the squad, but I never said that Messi told me to put the coach out. Never.

“I don’t have to fix anything with Messi; our relationship has not changed from my point of view. From his point of view, I don’t know, but, for me, the situation is over. We have exchanged many messages and he knows what I think.

“I didn’t want to turn a small situation into a global situation and put the whole club in trouble.” 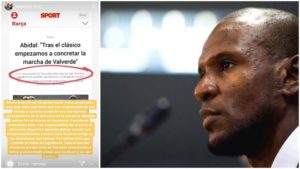 Messi has just a few months left to run on his Barcelona contract and it is unclear whether he will stay at the club or not, but Abidal has no doubt about his place in world football.

“I think, if we are to talk about performance, he’s the best player ever and he played his full career in Barcelona, so for that it is important to stay because he’s the key player,” he noted.

“But, as well, his idea [about whether to stay or not] will depend on the rest of the squad, the new project, the new ideas of the new board and their ideas for the coach, for example. And if, in the end, he can feel comfortable in this.

“From a marketing point a view also, Messi gives you so much, so he is an unbelievable asset. But it will be his decision and it’s not easy when you spend many, many years in the same club, sometimes you want to see something else. But will there be something better than Barcelona for him? I don’t know.”