FLASHBACK: How Saudi Government Arrested, Detained Sheikh Gumi In 2010 For Allegedly Having ‘Link With Terrorist’

In 2010, a popular Kaduna-based Islamic cleric, Sheikh Ahmad Gumi, was arrested and detained for over six months by the Saudi Arabian government for allegedly relating with Nigerian underwear bomber and terrorist, Farouk Abdumutallab.

My360info gathered that Gumi was arrested in February 2010 in Mecca on the request of the United States’ government for exchanging e-mails with Abdulmutallab.
It was learnt that the Islamic cleric who is currently advocating for bandits in Nigeria to be granted amnesty and not called criminals after meeting them was arrested after the US security browsed through 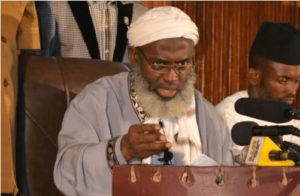 Abdulmutallab’s e-mail and found out that he corresponded with him shortly before he attempted to bomb a plane on December 25, 2009 in the US.

Gumi was first taken to Jeddah but was returned to Mecca and put under house arrest for many months before the intervention of the Nigerian government.

Abdulmutallab, then 23, had unsuccessfully tried to denote a bomb wired to his underwear aboard a Northwest Airlines flight from Amsterdam that was about landing in Detriot, Michigan with 289 people on board.
The device failed, but the terrorist became enveloped in a fireball that spread to the wall and carpeting of the plane.

Four passengers quickly restrained him and helped put out the fire, witnesses said, and he was escorted up to the first-class section of the plane and taken into custody by US authorities when it landed.

Abdulmutallab later acknowledged in a courtroom statement that he had travelled to Yemen and was “greatly inspired” to participate in such a plot by US-born militant cleric, Anwar al-Awlaki, who was killed by a US drone strike in Yemen in September.

US officials later said the terror group – al Qaeda in the Arabian Peninsula had helped foment the failed attack.

“I carried with me an explosive device to avenge the killing of innocent Muslims,” AbdulMutallab said in the statement, adding that the failed plot was in retaliation for “US tyranny and oppression of Muslims.”

He was sentenced to four life terms plus 50 years without parole on February 16, 2012.

Four People, Including A Child, Killed In Another US Public Shooting