A young man has taken to social media to thank singer, Davido for donating to his GoFundMe account to study abroad.

The man identified as Jide Sanyaolu first schooled in Europe but financial constraints forced him to return to Nigeria
This led to his mentor setting up a GoFundMe account so Jide actualize his dreams of finishing his studies abroad. 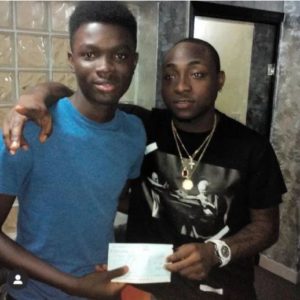 Luck smiled on the graduate when Davido dropped huge funds to support him and cover up for any financial issues that might arise.
The total money that was raised amounted to £12,124 (N5.5m).

The young man who has now fulfilled his dreams of studying abroad, bagged a first-class and gave thanks to Davido, his mentor, and Twitter family for their love and support.

– mentor sets up a gofundme for uni

-@davido dropped funds to support my fundraiser (thanks to Twitter folk) 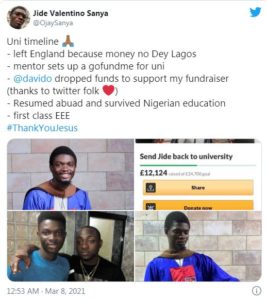 Alleged Rift Between Buhari And Tinubu, Handiwork Of Cynics – Presidency