Wizkid, Tiwa Savage win first Grammy awards……..
Nigerian singers, Wizkid and Tiwa have made the country proud as they won Grammy’s at the 63rd edition of the prestigious awards.

Wizkid won his first-ever Grammy award for his role in ‘Brown Skin Girl’, a 2019 song by American pop singer, Beyonce. 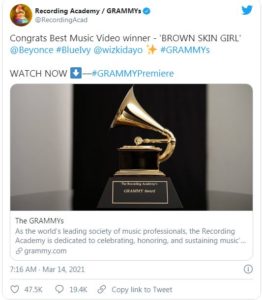 The project beat other contenders in the ‘Best Music Video’ category at the award ceremony held on Sunday.
‘Brown Skin Girl’, a track off Beyonce’s ‘The Lion King: The Gift,‘ was nominated for the category alongside ‘Life Is Good’, a song by Future featuring Drake, ‘Lock-down’ by Anderson Park, ‘Adore You’ by Harry Styles, and ‘Goliath’ by Woodkid.

read also<<<Davido will be shot dead while performing – Prophet (Video)

On her part, Tiwa Savage also got a Grammy award for contributing to Cold Play’s 8th album “Everyday Life ” which bagged the Album of the year ” award for the 63rd Grammy Award Show.