We are no satellite club’ – Vitesse shield ‘great connection’ with Chelsea

in Sports
Reading Time: 3min read
A A

Vitesse sporting director Johannes Spors has denied that the Eredivisie outfit are Chelsea’s “satellite club”, explaining that the pair merely have a “good relationship”.

The Blues have sent 29 players to Arnhem on loan deals over the past decade, including England international Mason Mount, and those regular exchanges have created the idea that Vitesse are a ‘feeder club’ for the Premier League giants.

However, Spors insists that the Dutch side are merely benefiting from the fact that their owner, Russian businessman Valeriy Oyf, is on good terms with Chelsea supremo Roman Abramovich.

What do Vitesse say about the link?

“The owners know each other well; that’s the starting point,” Vitesse sporting director Johannes Spors told Goal. “That’s where it comes from. Honestly, there’s not so much more to it than that. We have good contact.

“I have good contact with (Chelsea’s technical/performance advisor) Petr Cech, as I have known him for quite some time. We sometimes share thoughts, talk about football, their players and our players. There’s good communication. Honestly, though, I have a lot of these kinds of conversations with other big clubs.

“It is good to have a big club like Chelsea to share thoughts with. I have been here for one year and the history of loan players is important. We have to still make sure that everyone is convinced that it is the right step.

“I really had to fight for (Chelsea striker) Armando Broja, it was not like I wanted Armando and Chelsea said, ‘Here you go!’ No, I had to really convince him. If he said no, it is no! I had to convince Chelsea that we thought he was ready for that.

“It is a good relationship. Nothing happens because of the owners but it opens doors, let’s say.” 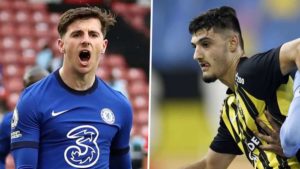 Who has gone from Chelsea to Vitesse?

As well as Mount,  Nemanja Matic and Bertrand Traore have also earned valuable first-team experience at the GelreDome.

Vitesse have also benefited enormously from the partnership. Matt Miazga, Lewis Baker, Nathan and Mukhtar Ali were all on loan at Vitesse when, in 2017, they won their first major trophy in their 120-year history: the KNVB Cup.

What’s the future of the relationship?

We might see fewer Chelsea players joining Vitesse in future because of factors outside of the control of the two clubs.

FIFA , the game’s governing body, is setting loan limits which will stop teams from sending more than eight over-22 players on loan in a single season.

However, Vitesse have traditionally targeted Chelsea’s younger stars anyway, like Broja, who is just 19.

Within Chelsea’s loan department, the staff are confident they can navigate the rules but the club have begun planning to offload some of the older players who have been in the system for a long-time.

“We expected changes, we’re doing our planning now and we will adjust things if we need to,” Chelsea’s loan coach Tore Andre Flo told Goal.

“Club-trained players under the age of 22 don’t count under the new rules and they’re the main focus of our programme, which is about sending our academy graduates out on loan. So, I don’t think it will affect us much.

“As a club, we already have fewer players out on loan now than before, so it is already a bit more focused. We can work a bit more with each player.”