Amember of Vigilante Group of Nigeria (VGN), Tajudeen Sheu, has been arrested over an attack on a Fulani settlement in Idigba, in the Olomi area of Ogbomoso, Oyo State.

The state Commandant of Nigeria Security and Civil Defence Corps (NSCDC), Iskilu Akinsanya, who revealed this while parading the suspect in Ibadan on Tuesday, said the victims of the attack had been rescue and taken to Obafemi Hospital in Ogbomoso
Isikalu said his men received a distress call from the Chairman of Miyetti Allah Cattle Breeders Association in Ogbomoso, Muhammad Mahmud, on Tuesday morning that some hoodlums had attacked their settlement and the NSCDC swung into action to arrest the suspect. 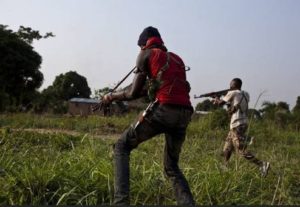 Isikalu said, “There was an attack on the Fulani settlement in Idigba, Olomi by some hoodlums numbering about six. The Agro Ranger in Ogbomoso/Oyo Axis swung into action and a suspect named Tajudeen Sheu, a vigilante in a VGN attire, was arrested.

L”One red Bajaj motorcycle with Osun State registration number EKG 100 UP, a single barrelled local gun, cutlasses, petrol in a bottle, torchlight and a local charm were recovered from him, the suspect.”

The suspect said he was attacked by an unknown person in the night, so he went to attack the community with five other team members, who are still at large.

The NSCDC commandant who paraded the suspect warned Nigerians not to take the law into their own hands but report or lodge complaint with security agencies, especially NSCDC in their neighbourhood when they have any security issue.

The commandant also disclosed that after the conclusion of investigation into the matter, the suspect will be taken to court.