A Nigerian man has taken to social media to share his thoughts on marriages involving literate and illiterate women.

According to the man identified as Martins Speed, a large of uneducated women last longer in marriages unlike their educated counterparts.

He added that they also known how to build happy homes better longer than the ones who are educated. 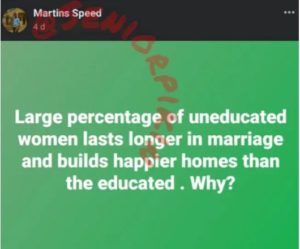