OPINION:HIJAB CONTROVERSY A BATTLE NOT APPROVED OF CHRIST

in gist
Reading Time: 5min read
A A

I have had to be patient enough to allow the Holy Spirit explain what’s really going on. You see, in times like this, we need divine insight. This opinion is going to be unpopular especially among my Christian brethren but its ok. I have seen many opinion writers arguing from both sides either for or against the wearing of hijab by female students to mission schools owned and financed by government. Some have also been neutral. No apologies, I won’t be neutral, for to be neutral is to be fearful of the consequences of truth and our own acceptance. We don’t need people’s acceptance but God. 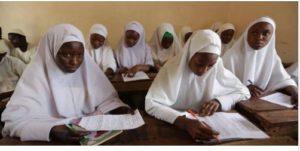 The only line of questioning as a Christian, who follow Christ’s example is to ask, “What would Jesus do?” If Jesus was to be a teacher or head the school board of those public schools, how would he deal with Muslims who wanted their children to wear the hijab with their uniforms?

READ ALSO: ”Wahala be like bicycle” becomes chorus during praise and worship in a church in Ikorodu (Video)
The greatest problem with religion is zeal that is not accustomed with knowledge. When people become zealous, they become a curse to the society rather than a blessing. No wonder Paul wrote concerning the Jews, “For I bear them record that they have a zeal of God, but not according to knowledge. For they being ignorant of God’s righteousness, and going about to establish their own righteousness, have not submitted themselves unto the righteousness of God.” Rom 10:2-3. The implication is that you will be pursuing a cause that seems right and justifiable, thinking you’re doing it for God but unfortunately, you are acting out your own will – that’s rebellion.
Chasing away Muslim female students for wearing hijab is something Jesus would not do. Christians did not fill the world today by such actions. Any action we take that doesn’t result to peace cannot be of God. How do I know?
“But the wisdom that is from above is first pure, then PEACEABLE, gentle, and easy to be intreated, full of mercy and good fruits, without partiality, and without hypocrisy.” James 3:17.
The Gospel that Christ went to the Cross for does not thrive in an atmosphere of strife or bitter rivalry. Making enemies of people of other Faiths by stubbornly sticking to our own rules, and compelling them to obey before they can be accommodated is not Christ like. Secular governments do that a lot and it is their way.
Would Jesus permit students to wear hijab in his own school? Absolutely Yes! For Christ, the hijab is not the battle, it is the souls of men and women. Hijab is an identity, a perishable item without eternal significance just as the circumcision to the Jews. The souls of men are being captured by the devil through sin, corruption and the gates of hell keep expanding, yet, we focus on rules rules rules.

Apostle Paul remarked in his letter to the Galatians saying, “Who has bewitched you…are you so foolish?…” What is wrong with the Christian leaders in Kwara State fanning hatred in the name of Christ? Is this how you were saved? Is this how you received your Faith, have you received the Gospel to make enemies and not reconcile men back to God?
You know what you’ve just done; The open door of evangelism that is opened to you is what you’re closing. You are strengthening the bars of enmity and suspicion in the hearts of a generation. What if you had shown more love, more care, more Christ-like behavior? What if we preached more and be kind. To those Christian leaders, you have become the enemies of the Cross and you make the Gospel more difficult to preach.
The devil just turned away your focus on the real battle for lost souls into a war of crazy razzmatazz. Its a foolish battle.
You see, even when the Caesars (government) makes law that compels missionary schools to allow hijabs for Muslim female students, understand the will of God in every process rather than contesting every battle with shouting. Not every battle is won by physical contest. Don’t we even pray again? Don’t we study again? I am convinced that “all things work together for good”, if we work together with God in His purpose. The Pharisees of old were so much carried away by their rules and customs in the Old Testament that when the fulfillment of the law came, I mean when the prophecy was being fulfilled right then, they could not see it (John 5:39). Let’s not frustrate God’s plan. Governments will come and go, social order is not static. The Caesars of the past are no more but God remains the same. Government structures, however named, belongs to Caesar “…render therefore unto Caesar the things which are Caesar’s; and unto God the things that are God’s.” Matthew 22:2

READ ALSO<<< Hijab controversy: Alleged Muslims seen stoning a church in Kwara (Video)
By understanding the things that are of God, we won’t struggle with things that belong to Caesar. Caesar can have the hijab, but we must render our own service to God even in the courts of Caesar. Has Caesar told you not to preach? Or pray? Or not worship your God? No! If hijab, a form of identity pieces you off, it means you need Jesus to help you.
What Can We Do Now?
I remember when Simon Peter caused trouble by cutting off someone’s ear with a knife when Jesus was about to be arrested. Jesus did a miracle at that spot – He fixed the ear. We need to fix the “ear that is cut down”. The ear of peace, unity and submission to God’s will. We need folks who possess the Spirit of Christ to pick up the ear of peace that is cut down by the Simon Peters in Kwara State. They were like popular thugs in our community when Jesus picked them up. Unfortunately, they still had that fire in their blood and they can use their zeal to cause confusion because sincerely speaking, they, like Christians in Ilorin love God. However, we must caution them and perform another miracle of fixing it. There are several ways to do that. This space will not contain it.

READ ALSO: THE MAN CALLED ECCLESIASTIST
As Christians, let’s work more on ourselves. Let’s judge ourselves so that we will not be judged as the scripture says. Love more, be more patient, enduring, kind, forgiving, pray and let’s preach more in love. Hijab or no hijab, let Christ be seen in you. A rock is not afraid of flood. Light does not run away from darkness, it consumes it. So, what are we afraid of?
Olumide Oyekunle
Email: juliusolumide@yahoo.co.uk