Okonjo-Iweala is the rudest woman

Fellow of Institute of Commonwealth studies, Martin Plaut utters on the newly appointed Director-General of the World Trade Organisation, Ngozi Okonjo-Iweala and her personality traits.
According to Plaut, the former minister of Nigeria and director at the World Bank is one of the rudest women he has met.
Recall that on February 15, Okonjo-Iweala was officially confirmed as the new WTO DG for a tenure that will run from 1st of March 2021 to 31st of August 2025.
He stated this in the wake of her appointment as the head of the global trade body, while wishing staff of the WTO luck in working with her.
my360info quoted plaut while speaking to the news:
”I wish her staff luck. One of the rudest women I’ve had the misfortune to meet”
See his post: 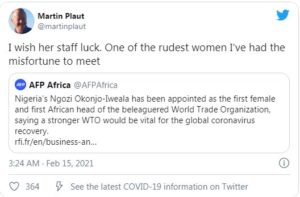