Movement Of Food Trucks Resumes From North To South

Business operators in Kwara and neighbouring states have heaved a sigh of relief as free movement of foodstuffs resumed after some hoodlums reportedly blocked the Ilorin-Jebba Expressway over the weekend.

It was reported that truckloads of food items from the northern parts of the country were denied entry into Kwara State and other states of the South-West zone.

Investigation revealed that some Hausa youths stationed at the outskirts of Niger State, popularly called Kara-Jebba, near Jebba in Kwara State, last week stopped many truck drivers carrying food items such as tomatoes, beans, yams, cattle, pepper, among others, from going further from Kara into Kwara and other states in the South-West. 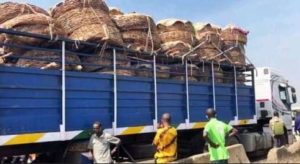 The situation, it was gathered, saw the trucks being parked along the road, creating heavy gridlock, while it was reported that some of the food items got spoilt.

However, it was gathered that free movement of goods and vehicles resumed on Ilorin-Jebba Expressway early Monday morning to the joy of residents and business people on the axis.

Confirming the reopening of the road in Ilorin on Monday, Prince Ibrahim Adebara, son of the traditional ruler of Jebba, in a report by Punch, said that a troop of military operatives drafted by the Federal Government effected the free movement.

Adebara, who said that the military personnel had stationed along the road to maintain law and order, added that they threatened to treat anyone that blocks the road as a terrorist.

One of the affected traders, Madam Balogun, said she was happy with the normalcy that had returned. She, however, lamented the loss caused by some perishable items that got bad while the situation lasted.

The Defence Headquarters, in a statement over the weekend by its Acting Director Defence Information, Brigadier-General Onyema Ugochukwu, said it had cleared the Jebba-Kaduna Road of those preventing trucks from going to the South and restore normalcy in the area.

“This is also to give a stern warning to any unscrupulous group or persons who are aiming at disrupting legitimate economic and commercial activities by preventing the free flow of traffic and movement of goods in a bid to generate clashes along ethnic divides to desist from such unpatriotic acts or face the wrath of the law.

“Members of the public are also urged to promptly report anyone found engaged in such atrocious activities to security operatives,” the statement had said.

Pirates Of The Caribbean Collection 1 – 5