I belongs to Sky Queens Confraternity

Promise Idorenyin a secondary school student who stormed her school with a locally made gun to shoot her teacher, has confessed that she’s a cultist.
According to her, Ikot Ewa in Akpabuyo LGA in Cross River, she belongs to a group called “Sky Queens Confraternity”.
Promise also disclosed that she has been sleeping with her “man-friend” since August last year and the man has been paying her bills.

The confession was made Friday at the Police Command Headquarters, Diamond Hill Calabar when she was paraded alongside her boyfriend who owns the locally made pistol and 11 others for various crimes. 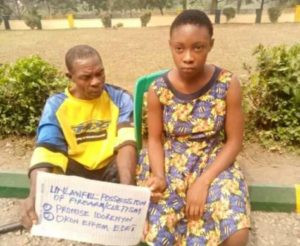 Briefing Journalists on Friday, my360info gathered that Cross River Commissioner of police, Sikiru Akande revealed that they discovered from their Investigation that the girl was taking the locally made double barrel pistol to a blacksmith.
Akande also said that investigation was ongoing to unravel the mystery surrounds the ownership of the gun adding that a suspect, Okon Effiong has been arrested and more details would be made reveals soon.

He revealed that within the period under review 13 persons were arrested for sundry crime including, Kidnapping, armed robbery, unlawful possession of Indian hemp, vandals amongst others Also, the boyfriend to the schoolgirl, Okon Effiong attest to Promise claim that they’ve been eloping since August 2020 and He’s also supporting her family too in so many ways.

The Police Boss however made a clarion called on parents and guardian and general public to cultivate the habit of getting acquitted to their children and wards to know what they do and who they mingle with.

Nigeria On The Brink Of Collapse, Says Borno Senator, Ndume