Mavin records boss and music producer, Don Jazzy, real name Michael Collins Ajereh, has spoken on the nack him and his team have for identifying talented people.

According to him, himself and his brother, D’Prince who is a singer and Jonzing record label founder, are tested and trusted when it comes down to spotting and developing artistes.

He stated this in reaction to a Twitter user’s post about the Don and his brother are taking setting the industry on fire with their signed artistes.

READ ALSO:  215,277 People Have Been Vaccinated Against COVID-19 In Nigeria

”Don and Dprince are not playing with this industry”, the fan had quoted a post of Don Jazzy promoting Crayon, one of the Mavin signees.

”Leave talent spotting and artist development for us. Tested and trusted” 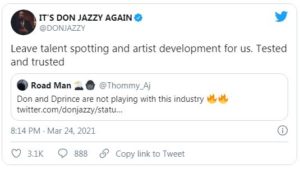