in Sports
Reading Time: 1min read
A A

Striker Harry Kane has vowed to help Tottenham bounce back from a forgettable week when they travel to Villa Park to face Aston Villa this evening.

After suffering the disappointment of losing last Sunday’s north London derby 2-1 at the hands of Arsenal, Spurs produced a terrible display in the UEFA Europa League lead on Thursday evening, losing 3-0 to Croatian outfit Dinamo Zagreb.

Mislav Orsic’s hat-trick meant that Zagreb won the tie 3-2 on aggregate, sending Spurs crashing out of the Europa League ahead of the quarter-final stage. 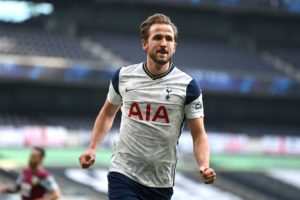 With the past week having proven to be a nightmare, striker Kane, who has failed to score in his last two matches, has sent a passionate cry to his team-mates and the fans, insisting they must bounce back against Villa.

“Time to bounce back tomorrow after a very disappointing week,” Kane said in a Twitter post. “No words will atone for the last 2 games, we just have to show our response on the pitch!