Sequel to his official declaration for the presidency, Legendary Comedian/MC, Gbenga Adeyinka D’1st has finally withdrawn from the presidential race, citing focus on his ongoing comedy tour, Laffmattazz Bursting Loose.

Gbenga Adeyinka who is known for spreading laughter across the South Western states of Nigeria made this known to the press. He said his focus right now is to bring premium entertainment to the good people of Akure come June 12, 2023. 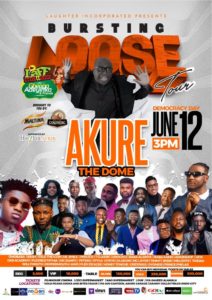 Speaking on his lined up acts for the day, he said “We are storming Akure with their favorite acts, such as Omobaba, Peteru, Bash, Baba Alariya, Odogwu, Dr. Smile, Prince Phelar, Stylo, Honeytongue, ATM to mention but few and T-Classic a superstar music act to be revealed later for music delight”