Igboho called the Ooni unprintable names and also threatened to attack him.
Former Minister of Aviation, Femi Fani-Kayode, has begged the Ooni of Ife, Oba Adeyeye Ogunwusi to forgive political enforcer, Sunday Adeyemo aka Sunday Igboho over his comments against the monarch.

Igboho during a virtual townhall meeting with Yoruba in diaspora on Tuesday, February 2, 2021, said the monarch disappointed the Yoruba people when he visited Muhammadu Buhari over the herdsmen crisis rocking the South-West region.

Igboho also threatened to deal with the monarch and Yoruba leaders for not speaking up against herdsmen crisis in the region.

The political enforcer called the Ooni unprintable names and also threatened to attack him.

Reacting to Igboho’s comments in a series of tweets on Wednesday, February 3, 2021, Fani-Kayode said he has spoken to Igboho, adding that the political enforcer has expressed regrets over his comments against the monarch.

He tweeted, “I just spoke with Sunday Igboho and he confirmed to me that what he said about our revered Ooni of Ife was said in the heat of the moment. 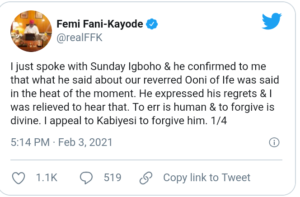 He expressed his regrets and I was relieved to hear that. To err is human and to forgive is divine. I appeal to Kabiyesi to forgive him.

“For the record let me state clearly and categorically that no Ooni of Ife, whether living or dead, has ever been a slave of the Fulani and neither will they ever be.

“I can also confirm that my friend and brother Seyi Makinde, the Governor of Oyo state, is a deeply courageous individual who would never bow before anyone let alone be a slave to the Fulani.

“We in the South-West must remain united in our quest for liberty and justice and in the face of the common enemy and we must move forward as one.

“No one can dispute the fact that Sunday has fought hard and done well. He has won the respect of all and sundry in Yorubaland and he has inspired millions of our people all over the world. Let us forgive him for this slip and continue to support and pray for him.”

Igboho recently issued a seven-day quit notice to herdsmen in Oyo State. After the expiration of the ultimatum, he stormed the Ibarapa area of the state with his followers to chase herdsmen accused of perpetuating crimes out of the Fulani settlement in the area.

Two people reportedly died as a result of the violence that erupted between Igboho followers and herdsmen.