F*k the Grammys – Lil Wayne lashes out on social media

On Monday, March 15, Weezy took to Twitter where he express his displeasure in a short and direct post.

“Fuk the Grammys,” he wrote.

Although it’s unclear what prompted Wayne’s recent tweets, he has expressed his disappointment in the Recording Academy for neglecting to nominate his latest album, Funeral.

READ ALSO:  Excitement as Wizkid and Asa link up

“As an artist, when I see da Grammys coming up & I’m not involved nor invited; I wonder. Is it me , my musik, or just another technicality?” Lil Wayne tweeted in December when he realized that he wasn’t invited to the ceremony.

“I look around w respect & wonder competitively am I not worthy?! Then I look around & see 5 Grammys looking bak at me & I go to the studio.” he added. 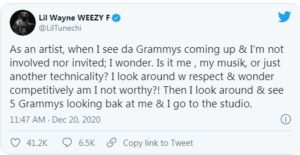 Last week, a report from The New York Times claimed that The Weeknd will be boycotting the Grammy Awards going forward after the Recording Academy failed to nominate his No. 1 Billboard 200 album After Hours or his Billboard Hot 100 No.