in Sports
Reading Time: 1min read
A A 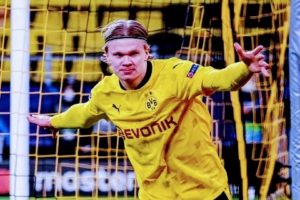 Any club wanting to sign Erling Haaland this summer will have to match Borussia Dortmund’s valuation of €180 million (£154 million).

Such a fee would make the 20-year-old the third-most expensive player of all time, behind only Kylian Mbappe and Neymar.

The striker is one of the hottest properties in world football and recently became the youngest player in history to reach 20 Champions League goals.

According to ESPN, Chelsea, Manchester City, Barcelona, Real Madrid and Bayern Munich are all interested in Haaland to varying degrees.

Given the vast wealth of their owners, City would appear to be the favourites to land Haaland, especially in the current climate. Indeed, La Liga president Javier Tebas has said that a “magic trick” would be required for Barca or Real to secure his services.

Leeds-born Haaland’s father Alf-Inge played for City, where he was on the receiving end of an infamous tackle from Roy Keane in the Manchester derby.

Dortmund are currently fifth in the Bundesliga, trailing Eintracht Frankfurt – who they meet after the international break – by four points in the race for Champions League qualification with only eight games left to play. However, should they fall short, they are not expected to budge on their asking price for Haaland.

The 1997 European champions face City in the quarter-finals of this season’s competition, having beaten Sevilla 5-4 on aggregate in the last 16.