A man has narrated the drama that ensued after his girlfriend gave his name to her prophet to find out if he is destined to be her husband.

According to him, the lady who is 27 years old gave his name to her prophet but the clergyman saw that there would be no marriage between them.

After her boyfriend was revealed to not be her future husband, the lady gave the name of the man who has been wooing her for about a week and the prophet proclaimed that they are to get married.
The man said that his girlfriend told him how the other man who had been asking her out said that he dreamt that they would get married and the prophet confirmed it.
Confused on what to do, the distraught man sought advice from social media users.

Read his story below: 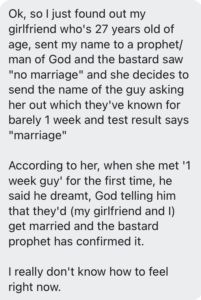