According to the journalist, Buhari is bad luck, therefore the two music stars should never let him touch their Grammy trophy or else their careers will end.

She also tried to debunk claims that Buhari is dead, by stating that the visit of WTO Director-General, Ngozi Okonjo-Iweala to the president is proof that he is alive.

Olunloyo who believes they will be the next to visit him following their Grammy wins, said that Buhari’s bad luck negatively affected Anthony Joshua when the boxing champion paid a courtesy visit to Aso Rock and allowed him to touch the title belt. 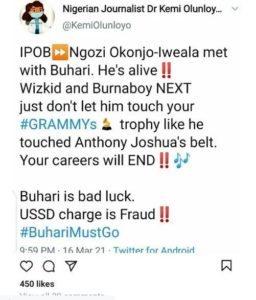