Popular Nigerian record producer, Don Jazzy has launched a new movement for ”ugly men” after his crush, Rihanna rejected him in a make believe chat.

The Mavin records founder shared screenshots of Rihanna chatting with someone who asked her if she knows Don Jazzy, noting that he likes her.

The songstress, then points out in the chat that she has heard of him, but doesn’t know what he looks like.

READ ALSO:  Burna Boy beats his record as artiste with the most streamed 2020 Nigerian album on Spotify

The fan who chatted her up in the make believe DM, then shared altered ”ugly” photos of the Don, thereby making Rihanna says she is not interested in him.

Don Baba J then uploaded the screenshots with the caption; 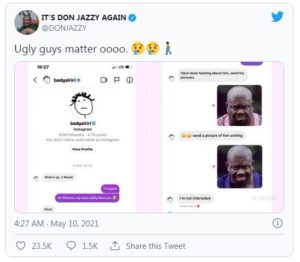 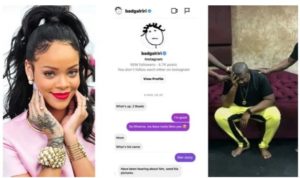