Davido ends vacation in US, hops on a jet back to Africa

Popular Nigerian singer, David Adeleke also known as Davido has ended his vacation in the United States after weeks of fun and drama.

The musician has flown to America on February 21, 2021, shortly before the 14th Headies award held in Lagos.

While there, he visited different cities from Atlanta, to Texas and even the old neighbourhood where he grew up.

The FEM crooner’s stay which has been eventful started being overtly dramatic after a video surfaced showing him leaving an event with American model, Mya Yafai in St. Maarten whom he reportedly left Chioma for and since then he has made headlines weekly.

Well, the father of three appears to have had his fill of the country and has hopped on a jet back to Ghana, West Africa. 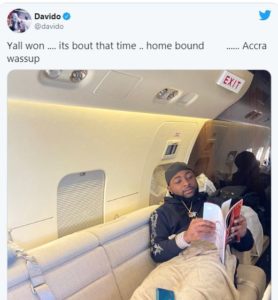 ”I can go back to Nigeria to get juju”