Tammy Abraham missed Chelsea’s 2-0 win against Sheffield United in the FA Cup quarter-finals due to a reoccurring ankle injury. 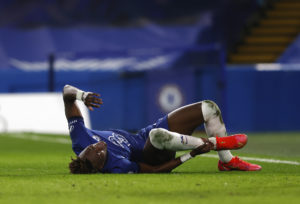 Abraham, 23, has been struggling with an ankle injury but Tuchel confirmed ahead of the cup tie he hoped to have the striker back in the squad.

But he was left out of the side on Sunday in west London, and post-match Tuchel revealed he had suffered another setback in training.

“Yes, he quit training yesterday after a five-minute warm-up so there was more or less no chance he could join the squad today,” said Tuchel on Sunday.

“It was the same injury, more or less, but he had a re-injury in more or less the same spot where the first injury, so he is in pain. He had to quit the session after five minutes with no chance he could join us today.” 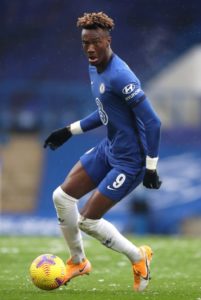 Abraham has fallen down the pecking order at Chelsea which also saw him miss out on England selection for the upcoming March internationals.

Tuchel has now instructed Abraham to focus on getting fully fit before worrying about his place in the side.

He added: “Yes, the most important thing for Tammy is to be fit. The second is then to take things step by step, to train and fight for his way back. His way back is maybe to be a substitute and to be hungry and full of quality in training. These are the next steps.

“Now is not the time to worry about the first eleven because he is out now for many games, unfortunately too many games. It’s absolutely not his fault and he is hungry to come back. He tries all the time but this is the risk with pushing the players to be back as soon as possible.”