Recall that Burna won his first-ever Grammy award for his album, ‘Twice as Tall’ on Sunday, March 14, 2021.

ILLBliss in a tweet on Thursday, said the success of Burna Boy should be one of the most motivational and uplifting stories in this generation which has to be studied and applied to life.

“Beyond artistic excellence and authenticity, @burnaboy’s success has to be one of the most uplifting and motivational stories of our generation.

Imagine if he had given up after failing to win the first grammy. His tenacity and belief Must be studied! And then applied to life” 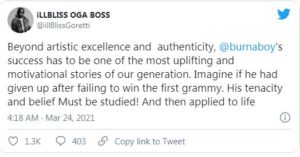