Yoruba freedom fighter, Sunday Adeyemo, popularly known as Sunday Ighoho, has been released from the detention of the Benin Republic government 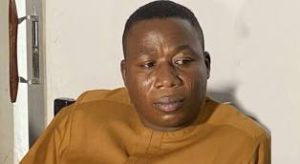 This was made known in a statement released by Communications Secretary, Ilana Omo Oodua (IOO), Maxwell Adeleye on Monday.

The Yoruba Nation agitator was said to have been released to IOO leader, Prof. Banji Akintoye.

READ ALSO:Bamise’s mother cries uncontrollably as she demands justice for her daughter who was killed after boarding a BRT bus (video)

According to Adeleye, Igboho’s freedom is “a triumph of truth over darkness in Yoruba land”.

Don Jazzy is a demon, an agent of the Devil – Politician, Seyi Gbangbola blows hot