in gist
Reading Time: 3min read
A A

Ayoung man in Maiduguri, Borno State, has alleged that authorities of two mega schools in the state sell admission slots to parents for as much as N15, 000 per slot. 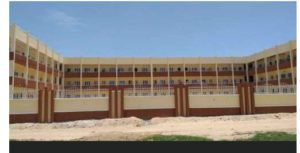 He, however, alleged that some persons have made it an opportunity to make money from poor residents whom they promise to give jobs at the schools after paying N30,000.

He said the schools derived the name ‘mega’, based on the size of the building, alongside the state-of-the-art facilities such as Asheik Jarma, Bulumkuttu Abuja Primary School, a two-storey structure with about 100 classes and another school yet to be named officially, which is directly opposite Zanna Umar Mustapha Housing Estate main gates, along Kano- Jos Road, Maiduguri.

He said: “There are schools called mega schools because of their sizes, there is a particular one that sells admission slots. It is located along Kano-Jos Road, called Asheik Jarma, Bulumkuttu Abuja Primary School. There is another school opposite legacy garden; they are very big, there are no schools like these mega schools in terms of size. Even the government calls them mega schools.

“The problem now is, they sell admission slots to the poor, some pay N5, 000 while some pay N15, 000. It is a government school built with support from the World Bank. It is World Bank that pays the teachers and, in a programme called Better Education Delivery Service For All.

“Payment for slots depends on the individual. Some people pay N5, 000 while some pay N15, 000 when it’s supposed to be free. These parents are extremely poor, they are ignorant. They have no idea that these schools are built for them.

“Some of them look for the money anyhow, they might even borrow but for those who don’t have the money, they will ask them to stay all day in the sun. They get tired and don’t ever go back again. This has resulted in so many out-of-school children in the state.

“They give out a hand card to the poor, to those who are interested in enrolling their children in schools. The parents buy these cards at N5, 000 or N15, 000 and present it to the school authority before the student will be enrolled in the school.

“They even make people pay for job offers in the school. I was personally contacted by one man asking me if I was ready to pay N30, 000, so I would be employed as a teacher there. At that time, I did not have the money and even if I did, I had other issues to sort with that amount of money.

“When I told him I didn’t have the money, he said I should pay N15, 000 upfront and when I got my first salary, I would pay up the rest. These people who sell the forms to parents and people who want jobs are the ‘boys’ of those who run the school.

“What is bothering me is that the poor that the school is built for, some people are blocking their chances of getting admission there. The school has state-of-the-art facilities. It is big in structure, the only problem is, there are no good teachers to teach them. Those who are qualified don’t get jobs if they don’t pay.

“The project is sponsored by World Bank but they allow the officials running the school to recruit the teachers. Those ones go ahead to give the jobs to those who can pay or their kinsmen.”