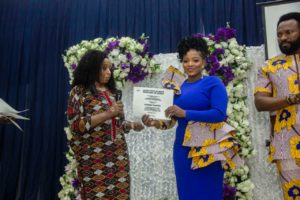 It was an evening of accolades and encomiums when, on Saturday, 18th September 2021, the national council of the Association of Movie Producers of Nigeria (AMP) stormed Akwa Ibom State to induct the state Chapter of the prestigious association.

Speaking at the inauguration ceremony, the National President of the Association of Movie Producers (AMP) and founder of Africa Movie Academy Awards (AMAA), Peace Anyiam-Osigwe MFR, congratulated the state chairman, Aniebiet Francis, for her doggedness.

She said with Aniebiet as Chairman of AMP, Akwa Ibom State is soon becoming one of the biggest hubs of the film industry for Nigeria. 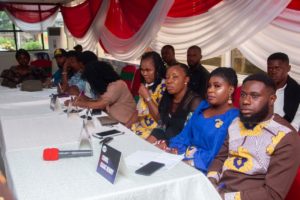 “Akwa Ibom has what it takes to become a major tourist destination for Nigeria. This is one of the states that can become a hub of the Nigerian creative economy. I see the energy and determination to succeed in Aniebiet. Somebody that won’t take a NO for an answer.

“I flew Ibom Air and it was on time. You have one of the cleanest cities I’ve seen in Nigeria, with fantastic road networks. I have spent barely two days in Akwa Ibom and I’ve seen a couple of beautiful movie locations that can be easily accessed without any form of harassment by miscreants.” 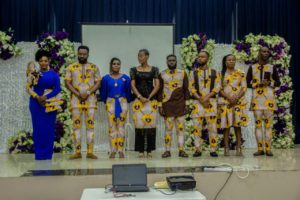 Earlier in his Chairman’s speech, Commissioner for Local Government and Chieftaincy Affairs, Rt. Hon. Frank Archibong, described Aniebiet as a go-getter, as she succeeds in everything she ventures into, and expressed optimism that she will not fail as Chairman of AMP in Akwa Ibom State.

He said the movie industry is an industry that should not be toyed with but should be encouraged to form a part of any government in Nigeria.

On his part, the founder of the Inoyo Toro Foundation, Mr. Udom Inoyo, applauded the state Chairman of AMP for her efforts in creating jobs in the state by impacting on the people and promised a collaboration to make something great out of the association.

Also speaking, Commissioner for Culture and Tourism, Mr. Orman Esin, spoke of Akwa Ibom as Nigeria’s best-kept secret, saying that there is a lot about the state that people are yet to know.

According to him, after moving from Nigeria’s best-kept secret, Akwa Ibom will become Nigeria’s real deal.

Mr. Esin further stated that Aniebiet Francis as the state chapter, AMP would change the narrative of the state, making Akwa Ibom the Nollywood of Nigeria.

Reacting, the state Chairman of AMP, Aniebiet Francis, informed the dignitaries that the association has so much to offer and to explore if it could be supported. 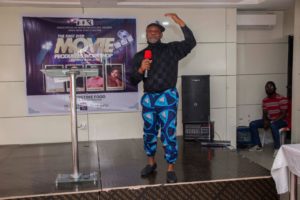 “The value chain created by the movie industry is too enormous for any smart government that sincerely wants to create jobs, wealth and develop the tourism sector of the state, to undermine.

“Producers are the body that carries the womb. We are pregnant with a child that needs to be nurtured from the prenatal stage to the delivery and postnatal stage. Your support can serve as doctors, midwives, pharmacists, and hawkers within the hospital to the movie industry.”

The inauguration ceremony was preceded by a two-day first-ever Movie Producers Workshop in the state, which started from Friday, 17 to Saturday, 18 September 2021 at Spring Time Food, Uyo.

Facilitators of the workshop included a United Kingdom-based Nigerian filmmaker and entertainment executive, Peace Anyiam-Osigwe MFR, who doubles as the National President of the Association of Movie Producers; a Board of Trustees (BoT) member of the Actors Guild of Nigeria (AGN), Sunny McDon, and veteran Actor and Director Francis Onwochei, among others.

Sunny McDon who spoke on the topic, Experience of Production, Production-Post Production, charged the participants to have the audacity of belief in their pursuit in the movie industry, noting that, “as producers, you should see yourselves as businessmen and women with integrity.

“As producers, you should think business first rather than focusing on popularity. You don’t have any business with the show. Leave the show and go for the business because the show of the business cannot stand if the business of the show does not stand.

“Under no circumstance should you go into production without a contractual consent of a director and actor, even if it is a one-line agreement to avoid disappointment during production and post-production stages, as most of them usually abandon their work.

Highpoints of the event were the induction of new executive members of the state chapter of AMP and the presentation of appreciation plaques and awards to veteran Nollywood actors including Regina Askia, Liz Benzon, Andy Boyo, Sunny McDon, Francis Onwochei, among others, while Prince Owoidehe Adiakpan was decorated as Patron of AMP, Akwa Ibom Chapter.