A group agitating the sovereignty of the Yoruba nation has taken to Twitter to show off the currency designed for the proposed Yoruba nation, Oduduwa Republic.

The group in a post on Sunday, March 21, shared an image of the proposed currency on its Twitter handle @OduduwaRepublic.

“Oduduwa National Currency shall be called ‘FADAKA’ Meaning Silver .. or short as just ‘FAD’ Here is a 20 Fadaka Sample Banknote,” it captioned the image. 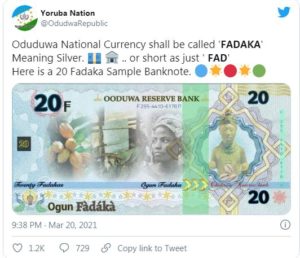 Akintoye and Igboho, among other Yoruba leaders stated that the Yoruba nation can be independent and yet, thrive.

Weeks after hailing boyfriend as best in the world, lady cries out over physical assault (Video)